Pretty Melissa Manning is that fantasy college coed male students and professors wish they could sit next to. Unfortunately for thousands of university campuses around the world, there is only one Melissa. She is blessed by nature and passing the blessings forward by becoming a model and posing for SCORE and Voluptuous. That kind of generosity is beyond mere tape-measurement.

Melissa’s numbers add up to a healthy 44-28-38. Not the numbers in the notebook she’s writing in. The numbers that make up Melissa’s astounding body. (We’ll take it for granted that you’ve seen Melissa’s re-measuring video (“Melissa’s Cups Runneth Over”) by now.

Now, Melissa says she should be studying but she can feel your eyes staring at her heavy tits. She says it’s getting really hot at her desk and she doesn’t know how she’s supposed to get any studying done with you staring.

That bra is too tight, complains Melissa. The poor girl can’t breathe. She must readjust her kneadable knockers right then and there. Melissa stands up and squeezes her big boobs together so tightly, they escape her bra. Just how lusciously squeezable are those cupcakes? Melissa will show how much, squishing them and pinching her pointy nipples as the camera moves in for a tight close-up of her jubilant jugs.

When Melissa leans forward and presses her mamnificent melons on the glass desk top, there is only one respectable thing to do. Get under the desk and look up at Melissa. Miss Manning brings a new definition to tits and ass on glass!

Study hall is done for today. Who can concentrate with Melissa Manning’s big boobs in their face? 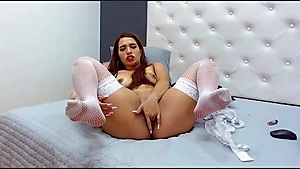