Today is bra day, a holiday at SCORELAND.

It’s also tits-a-poppin’ time for Jenni Noble. She is literally busting out of her bra and blouse as she checks out her shapely rack in a mirror. Jenni jumps for juggy joy and achieves lift-off in slow motion and in real time. She tries on several bras of different sizes then clears them off the bed for some play-time.

Jenni talked about a lot of topics with Voluptuous editor Dave. One of the topics was dick photos. Most girls are annoyed by them.

SCORELAND: If a guy sends you a dick pic, is that good or bad?

Jenni: It kinda depends. If someone sends me a random dick pic, I’m going to say, “Go away.” But if I know them and I’m into them, that’s good. It’s fun.

SCORELAND: So a guy knows it’s okay to send you a dick pic when…

Jenni: We have to be into each other, and you can’t just send me a dick pic. There has to be some conversation leading up to it.

SCORELAND: If a guy sends you a dick pic, should the dick be hard or soft?

Jenni: Hard. But if I know you for a while, soft is okay because that gives me a size reference. Some guys’ cocks look small when they’re soft, but when they get hard, it’s like, “Holy, shit, what just happened?”

SCORELAND: Dick pic before the first date: good or bad? 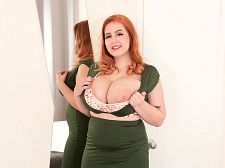